"It's wrong to have a firm perspective on anything." 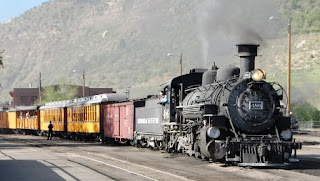 Out of my recent evangelistic conversations one takes the cake for the best illustration of the asking good questions challenge from the day before yesterday. While at the train station for a little family time (yes, we go look at the trains 2 or 3 times a week - I'm sure all you parents understand) we bumped into "M," a popcorn vendor. I asked him if there was a way to get back to the museum from where we were standing. He said, "yes, right through that door." That was an example of a question used to "meet" someone. I said, "thanks," and then asked if he was from Durango. He said, "no, I'm from Farmington." There was an obvious lead into a spiritual conversation for me here. I told him, "My wife and I run a non-denominational Christian ministry at the college here and we were trying to help get a little ministry started at the college there in Farmington but just don't have enough staff right now, maybe later. What about you, do you have any background in Christianity?" He told me he had been to Bible college. I said, "Great! What about today, where do you stand with Jesus now?" He replied, "Jesus knows where I stand with Jesus." He looked like he was about to cry but went on to explain how he has left Christianity because, "it is wrong to have a firm perspective on anything." I asked another, rather obvious question, "isn't that a pretty firm perspective." He sat there speechless for a good 30 seconds. The whole point of the book Tactics, by Gregory Koukl (I've mentioned it numerous times and you really should read it), is asking questions. Koukl points out that most people are just repeating slogans they've heard and more often than not have never really thought about why they believe what they believe. That was definitely the case with "M." After his long and bewildered pause he finally said, "there is nowhere in the New Testament where anyone takes a firm position on issues like the church does today." I mentioned a few examples, which he said he remembered, after which he was stumped again. About that time a few customers approached him so I thanked him for talking and encouraged him that Jesus is waiting for him to return. It was a short conversation but a good example of how far asking a few questions will take you. Please pray that God would work on his heart and bring "M" back into fellowship with Himself. I hope you had a chance to apply the asking good questions challenge but in case you didn't, check it out here and give it a shot. Well, you can pray for me. I am finishing up printing off all the resources for the Nightvision concert/event evangelism workshops I will be teaching. I hope to see you there!

P.S. Please follow this blog and share any thoughts you have with us!
Posted by Eternityimpact at 8:05 AM

This blog is a place for encouragement, ideas & stories about fulfilling the Great Commission through intentional evangelism (including apologetics), committed discipleship & leadership development. Enjoy!

I haven't been able to do much with this blog lately, but you can get these ideas and more ideas and evangelism training in my new book 101 Easy, Effective and Exciting Evangelism Ideas (get it by clicking here). Also, get the Kindle version for just $0.99 here.
Get the BEST FACTS apologetics / evangelism tool here.
If you're having trouble listening to any of our MP3's you can also get them all here: http://eternityimpact.sermon.tv/
More Good Stuff: The eternityimpact website. Evangelism ideas & resources. The Gospel as Jesus Tells it! Solid discipleship ideas & resources.

See an interactive map of what what God is doing around the world here and another one here.