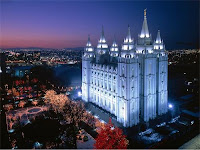 The Mormons are on campus!!! Yesterday, as I walked past a new table in the Union trying to see who it was, I realized it was the Mormons at exactly the same time they asked me, "What do you think about the book of Mormon?" I told them Joseph Smith should have read Gal.1:8-9. I continued by sharing a few problems I have with the book of Mormon, like Alma 7:10 saying Jesus was born in Jerusalem. They answered that that was written because the Jews wouldn't have known where Bethlehem was. I reminded them that Bethlehem was prophesied to be the hometown of the Messiah in Micah. Other problems include the reality that nothing in the Book of Mormon has been archeologically verified, no Hebrew artifact has ever been discovered in the US and both linguistics and DNA trace Native Americans back to Asia, not Israel. I also asked them why LDS doctrine, if true, constantly changes (they used to believe minorities descended from Satan, polygamy was O.K., etc) and  compared Jesus to Joseph Smith: one was pure, the other a polygamist pedophile, one died peacefully to pay for my sins, the other died a sinful death fighting to the bitter end. It was at about that point that one of the precious young missionary ladies told me they were through talking to me. I asked her if she had been serious when she asked what I thought of Mormons. She said yes so I asked if I could continue. She said I could. After that I transitioned to the real issue with Mormons, that of working for our salvation. I think these two young ladies were the 1st I've ever spoken to that readily admitted they believed works were necessary (usually Mormons try to play this game where they act like they just agree with you and you really have to fish it out). We discussed salvation by grace through faith alone and then we discussed how you can know you are saved. They told me about the "burning in the bosom" and I told them a lot of non-Christians get similar experiences by doing drugs, partying, drinking and sleeping around. I encouraged them that we can only have confidence in our salvation through faith in God's Word and what Jesus did at the Cross, not through a "Burning in the bosom." We wrapped up the conversation from there. I encouraged them to check out saintsalive.org and then left. It was the first time I've met Mormons evangelizing on campus. Very interesting! Anyway, here are a few links to get you started sharing with Mormons: Christian Answers for Mormons, CRI ideas and Utah Christian Publications ideas. I hope you'll apply those ideas and share with your Mormon friends as well!

I haven't watched this whole video yet but it looked good. Let me know what you think!

Posted by Eternityimpact at 7:33 AM

This blog is a place for encouragement, ideas & stories about fulfilling the Great Commission through intentional evangelism (including apologetics), committed discipleship & leadership development. Enjoy!

I haven't been able to do much with this blog lately, but you can get these ideas and more ideas and evangelism training in my new book 101 Easy, Effective and Exciting Evangelism Ideas (get it by clicking here). Also, get the Kindle version for just $0.99 here.
Get the BEST FACTS apologetics / evangelism tool here.
If you're having trouble listening to any of our MP3's you can also get them all here: http://eternityimpact.sermon.tv/
More Good Stuff: The eternityimpact website. Evangelism ideas & resources. The Gospel as Jesus Tells it! Solid discipleship ideas & resources.

See an interactive map of what what God is doing around the world here and another one here.